Whales of the St. Lawrence 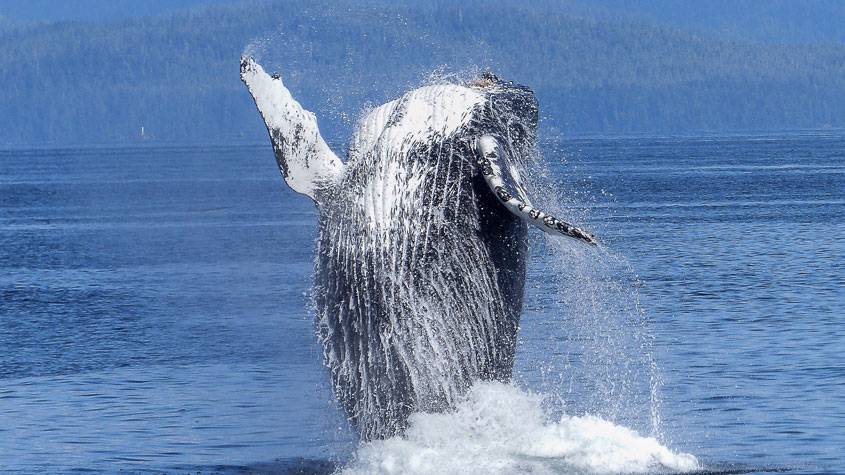 The Gulf of the St. Lawrence: the best whale watching site in the world

Why? The abundance of food, mainly krill, for marine mammals. This is due to the meeting of 3 undersea currents in the Tadoussac area:

The Labrador Current hits the shoals at the mouth of the Saguenay River and rises to the surface, where its mixes with the two other currents. This upwelling of deep water sirs up the organic particles that fertilize the water. This stimulates the development of plankton, small crustaceans and larger fish.

Krill, which is a type of plankton, is the Norwegian word for whale food. It is a small crustacean measuring about 3 cm. Whales also feed on capelin, smelt, salmon and cod.

The daily diet differs for each type of whale: minke whales feed on about 100 kg of fish daily. For fin-back whales, it means about 2-3 tons of krill and fish, while the blue whales feeds on about 4-5 tons of krill.

For more information on the St. Lawrence River and its wildlife, discover these websites:

The baleen whales: the mysticetes

The baleen is composed of a number of rigid hairs sandwiched between two plates made of a hard yet flexible material, similar to our nails, which extends down to the roof of the upper jaw. It filters the water taken in by the whale. There are between 200 and 400 on each side of the mouth.

There are two groups among the mysticètes: skimmers and gulpers. The whales of the St. Lawrence are gulpers.

How do the gulpers feed?

Whales are always on the look-out for schools of fish. Once they have located their food supply, they open their mouth. The pleated throat grooves that run from below the mouth back to the navel, expands immensely, permitting them to engorge great mouthfuls of food and water in a single gulp. These folds have earned them the name of rorquals which is derived from the Norwegian word Royrkval meaning furrow whale. In this mouthful of water, there is a large quantity of food particles. Whales close their mouth, push their tongue toward the upper palate and contract their ventral grooves. After passing through the baleen, the water is expelled from the mouth. All the food is trapped and whales just need to lick their baleen and swallow the food.

Toothed whales capture their prey one by one. They spot them with their sonar, chase them and catch them with their teeth or with a sucking motion by opening their mouth abrubtly. It is said
that these animals can stun their prey by sending a series of very powerful ultrasonic sounds.

Toothed whales eat fish, shellfish and squid.  They do not chew their food. If the prey is too big, they will just tear it to shreds.